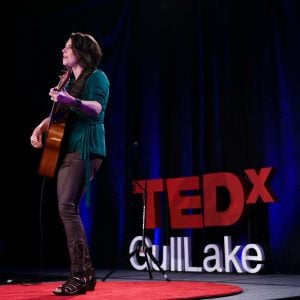 Elisa Korenne on the stage of TEDx Gull Lake 2017.

My palms were sweating. My hands were shaking against my guitar. Don’t trip on the stairs, was my only thought as I took my first look past the stagelights into the room. One hundred

and fifty people and five video cameras glinted into view. I felt the waiting silence in my chest.
I was so nervous when I took my first breath that I forgot to hook my guitar up to the sound system, and a sound tech had to come onstage to fix my mistake after I put my guitar into its stand. 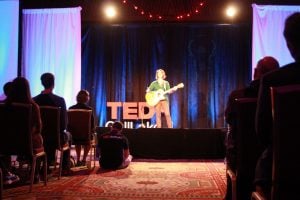 After hundreds of hours of preparation, my talk lasted only seventeen minutes. And for that brief span, I needed every single minute of those hundreds of hours of preparation. It took a lot of time to ruminate about the topic of differences and divisions, write and rewrite my speech, consult the advice of my brilliant speaker buddy Sara Sherman of Discovery Horse Farm, memorize and memorize some more,
and practice endlessly—in front of the mirror, the dishwasher, the washing machine, a timer, my bookclub, my inlaws at Easter dinner, and any friend I could wrangle into being an audience. The result of all that work was a speech and a performance that I am proud of. 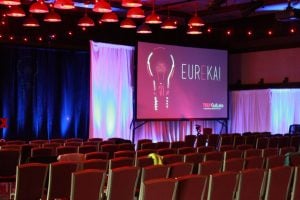 event itself, actually the entire weekend around the event, was inspiring. It was a treat to simply interact with the incredible speakers and the dedicated team who put the event together. 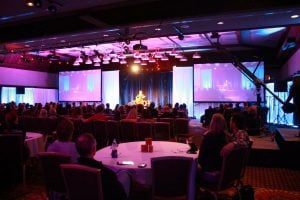 Elisa presenting to a live crowd at TEDx Gull Lake 2017

One of my favorite non-speech moments was entering the Sherwood Forest restaurant for the pre-event party, and catching a glimpse of the hidden backroom where Al Capone used to do business while spending summers at the Brainerd Lakes. Other wonderful pre-speech moments were a mid-rehearsal day walk under early spring sunshine through the stunning Madden’s Resort and playing with husband and kids on the shores of beautiful Kavanaugh’s Sylvan Lake Resort. (People: Brainerd, Minnesota is a beautiful place! How did I not realize this till now?) 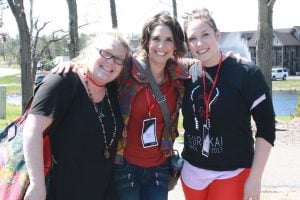 Also, I loved meeting some of the people behind the scenes of this multi-faceted event that required a huge amount of work from dozens of people. The vibrant Kate Hunt, TED speaker, archeologist, paleo-oncologist and founder of Paleo Oncology, welcomed me with a big hug. She is the person who came up with the idea for TEDx Gull Lake. Her father, Joe Hunt, stands at the helm of the event. Like a King pulling the strings of his court, Joe made TEDx Gull Lake 2017 happen. Jennifer Smith, dear soul, director of the United Way, and owner of the Nisswa Yoga Studio, co-emcee’d the event and was my first point of live contact with TED. Phil Hunsicker introduced me, and all the other speakers, with a short and heartfelt original poem he wrote about us and our speeches.

But real standouts of the event were the TED Talks.

What is a TED Talk? 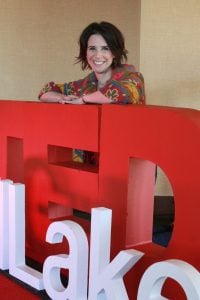 TED is a nonprofit devoted to spreading ideas, usually in the form of short, powerful talks of 18 minutes or less. TEDx events are independently organized collections of speakers and other idea-inspiring presentations and activities. TEDx Gull Lake 2017 featured thirteen presenters who spoke, sang, screened videos, played violin, and told stories on a world of topics. One even modeled sunglasses.

Oh, and I guess I shouldn’t forget to mention my own contribution to the day:

My speech went beautifully. I am so pleased with how it was received. I am especially grateful that TEDx Gull Lake gave me the opportunity to share excerpts of my songs, my personal story as an urban outsider in rural Minnesota, and the idea first inspired by the stories of the oddballs that inhabit my Ordinarily Unsung songs: differences can connect us.

Learn more about all of the TEDx speakers at TEDx Gull Lake’s website.

The video of my speech, and all the others, is being edited and should be available sometime this summer or fall. Stay tuned.

A particular thanks to Krista Rolfzen Soukup of Blue Cottage Agency for her support and all the wonderful photos.

Do you have a favorite TED talk to recommend? Please tell us about it, and include the url, in the comments section below.