Excerpt from Hundred Miles to Nowhere by Elisa Korenne – Chapter One 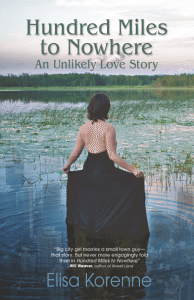 “Big city girl marries a small town guy—that story. But never more engagingly told than in Hundred Miles to Nowhere.  It’s full of humor, heart, and in the end proves that love always wins. Women will love this book, and I did, too.” ~Will Weaver, author of Sweet Land and The Last Hunter: An American Family Album

“An absolutely stunning debut. Brilliant, breathtaking and hopeful. Korenne is the ideal storyteller: part enchantress, part dogged reporter, wise, studious, generous. Her book is a superbly crafted journey into the unexpected riches of the rural American wilderness, and of the heart.” ~Josh Axelrad, author of the memoir Repeat Until Rich: A Professional Card Counter’s Chronicle of the Blackjack Wars

Forget what you’ve seen, this is a new dream
Trust me, I truly believe
It’s our biggest chance yet, so step up and place your bet
—“The Next Big Thing”

The first thing I learned about Minnesota was that it wasn’t where I thought it was. That was Missouri. Minnesota was between Wisconsin, Iowa, North Dakota and the Canadian border.

With a New Yorker’s myopic view of my own country, this information didn’t help me much.

But I was a veteran traveler, and I knew how to prepare for a trip to a new place. I borrowed every book on Minnesota that I could find in the New York City public library system. A pile of ten dog-eared travel guides teetered above lyric sheets on my desk, each in turn explaining to me that Minnesota had over ten thousand lakes, the people of Minnesota were as nice as they were reputed to be, and the one thing a visitor to Minnesota must do is go canoe camping in the Boundary Waters Canoe Wilderness Area.

I had never before considered Minnesota as a place to visit, let alone live. I hadn’t believed the invitation from the New York Mills Cultural Center until my neighbor Jane pulled the letter from my sweaty hand and confirmed it.

“You did it! I told you you could get into an artist residency.” Her hip canted to hold her front door open; the rock music from her speakers thumping into the cement-block hallway separating our apartments. “You even got a stipend.”

“I did?” I swiped at the letter. At my mailbox in the narrow vestibule at the entrance to our building, I hadn’t gotten past “Congratulations.”

Jane pushed the door further open with her hip, letting me into her haven of modernist furniture and books of poetry. The architecture of her apartment was identical to mine, one floor below, but her sleek minimalism was poles apart from my maze of mismatched thrift-store furniture and musical instruments.

Jane pulled an atlas from her bookshelf and flipped to the Minnesota page. She traced her finger to a tiny dot in the northwest quadrant of the state. “New York Mills. In Otter Tail County,” she said.

“Otter Tail County,” I repeated softly, heart thumping along to Jane’s rock music. The rhythm traveled to my feet and shook my hands, and soon I hummed and wriggled my hips as the meaning of the letter sunk in.

I had been invited to be a resident artist for one month in a small town in Minnesota. I was going to be able to work on my songwriting in a county called Otter Tail. Otter Tail. A name that evoked wildlife, farmland, trees.

My glee at leaving the city felt like a betrayal. Eight years after moving here, I was still trying to make the City into my first real home. By the time I applied to visit New York Mills, I had lived in New York City twice as long as I had lived anywhere else in my life. After six elementary schools, four states, and five countries, I had come here to settle down. I had traveled across six continents for school, work and play, and finally found myself drawn here: the place where I would establish my roots.

It had been a relief to finally settle in one place. To live in an apartment I wouldn’t have to pack up for a while. To be so familiar with my street that my body knew how many steps it took to get to the laundromat, the grocery store, the sandwich shop.

Where I would settle had never been in doubt. All my life, New York City had been my true north. No matter where I traveled, my internal compass always pointed to the skyscrapers and boundless energy of the city. I had been born here. My parents had met here. My relatives lived here. Most of the people I had known from high school in Pennsylvania and Yale University in Connecticut had found themselves pulled to the City like metal shavings to a magnet. Throughout my travels, I always knew I’d return. But eight years into my city life, I still felt like I was looking in from the outside.

I was sure an artistic trip to a far-away place would cure this unfortunate illusion. Visiting a world as different from New York as Otter Tail County would prove through contrast—I was sure—how much I belonged here. I would return home from the middle of nowhere and remember why I had chosen New York City.

Jane stepped into my makeshift dance floor between her Ikea couch and the bookshelf. “Hey, I gotta get back to writing,” she said. She returned my letter. Her door shut behind me with a steel clank, and I was trapped again in the dim, cement-block hallway.

Jane was a successful poet. She had won awards for her writing and spent most of her days working on her next book. She was the one who had introduced me to artist residencies—places that gave artists time and space to create. It sounded like bliss to me, a singer-songwriter constantly trying to juggle the freelance consulting I did to pay my rent with the obligations of booking gigs, writing songs, recording, and managing an ever-changing roster of side-musicians.

I walked across the landing, slower now, past the apartment where the faded man with mild eyes lived. He was the symbol of all I didn’t want to be: a person still living alone in a tiny one-bedroom apartment in the thick of middle age, never having made it, never having seen the world, let alone changed it.

I intended my life to be different. I would make a name for myself as a singer-songwriter. My Smith Street apartment was a jumping-off place where I would gather myself and bloom before planting myself in a larger garden.

But I hadn’t gotten far. In fact, some days I was sure I had moved backward. For the love of songwriting, I had given up a promising international development career. Once upon a time, when I had started an international nonprofit, I found myself talking to heads of Fortune 500 companies in corporate Board rooms. Now, I struggled to play two or three $50 gigs a week.  With my first acceptance to an artist residency, I was finally heading somewhere.

The New York Mills Cultural Center had listened to my edgy and elegant acoustic and rock music and liked it enough to invite me to write songs for the entire month of May. One whole month away from the daily routine of subway tunnels, honking traffic, and concrete horizons. I had been awarded fifteen hundred dollars for being a songwriter, plus time and lodging to live and write for a month.

I was going to the prairie to be an artist. I would gain artistic credibility and return to New York to relaunch my life.

I called up an image of myself playing guitar in the midst of an amber wheat field. My stifled laugh sounded like a gunshot in the closed hallway. Guitars looked a lot better backstage at CBGBs than they did in a field.

I hugged my acceptance letter to my chest and scrambled down the linoleum-covered stairs to my apartment, my cozy nest of solace, my retreat from the noise and motion of the city. A velour L-shaped couch took up most of the main room. The exposed brick wall was covered with souvenirs from my travels: two marionettes from Thailand, a wool blanket from Bolivia, a carved fertility statue from Ghana. My wheeled Ikea desk was jammed into the corner between dresser and stove, until work required me to pull it into the center of my living room.

I swiped my arm across the desk to clear a space in the center, shifting a mishmash of half-written songs, guitar picks, and a costume necklace. I placed the acceptance letter carefully on the surface and stepped back to see how it looked in my apartment.

Maybe this artist residency in Minnesota was the antidote to my dissatisfaction. Maybe I would find what I was looking for in Minnesota.

I didn’t know what that was, but I knew I hadn’t found it in New York City.

The next day I hopped out of bed and padded barefoot to the desk. The letter was still there. Congratulations. Sincerely, Lynn Kasma, Executive Director of the New York Mills Cultural Center. It still looked good.