I like oddballs.  I like them so much that I write songs, stories, and entire shows about them.

So often, the individuals that society sets aside as “different” and therefore unacceptable, are the ones that are just a hop, skip, and a jump ahead of the rest of the crowd. They are the ones who, to be true to themselves, need to shake things up a bit.  And these oddballs bring me hope when I feel like whatever I’m doing is not quite acceptable to my community.

Here are some individuals who have inspired me so much that I had to write songs about them. Sanford Berman was born in Virginia, Minnesota a small town north of Duluth. After studying rhetoric at Columbia University, he discovered that teaching just didn’t pay the bills, so he decided to try and make some money using a little skill he’d learned on the side: stage-hypnotism. Sanford changed his name to “Dr. Michael Dean” and became a night club hypnotist in San Diego and Las Vegas. His fame captured the attention of a con-man who took his stage name, stalked the real Dr. Michael Dean, and made a copycat life for himself. Berman made millions of dollars as a stage hypnotist, and, once retired, became a great philanthropist.

Dorothy Moulter (1907-1986) became unexpectedly beloved in Minnesota as “The Root Beer Lady.” She lived on an island in Knife Lake in the middle of the Boundary Waters wilderness in a cabin with no running water and no electricity. Dorothy liked to make homemade root beer. When canoeists came upon her cabin, they were surprised and pleased to discover they could get a mug full of her home-made, ice-cold brew. She lived on the Isle of Pines for more than 56 years, and sold root beer to as many as 7,000 visitors a year. Because she was such an institution in the area, she was allowed to continue living in her home well after the area became a park. Today, Dorothy’s cabin is a museum, and her root beer is sold all over the state. 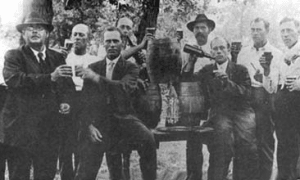 Joseph Studer started out as a farmer, but when his crop failed during Prohibition in the 1920s, he needed to find another way to feed his ten children. His cousin happened to have a recipe for moonshine. Studer hid his still in the back woods, and made a brew he called Studer’s Moonshine. The speakeasies were looking for alcohol, and Studer’s moonshine became a nationally famous brew. With it, Studer made a name for himself, pleased otherwise unsatisfied drinkers, and supported his family.

Since moving from New York City to rural Minnesota, I’ve found myself more directly inspired by my song subjects than I thought I would be. Like Sanford Berman, I’ve discovered that it is easier to make a career as a performer in rural Minnesota than as a investment banker or consultant (two of my old jobs). Like Dorothy Moulter and Joseph Studer, I’ve learned how to create luxuries off the land. My wild plum jam has become a favorite among my family and friends, and just this past year I’ve learned how to tap my maple trees to make maple syrup. When I lived in New York City, I never could have imagined living a life that went so against the grain of my old experiences.

Here are the songs that Joseph Studer and Dorothy Moulter inspired:

What oddballs have inspired you?  Tell me at www.elisakorenne.com/blog.