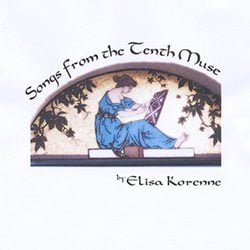 Did you know that the first female presidential candidate was a former fake psychic who bedded Cornelius Vanderbilt? How about that Dr. Bronner (the verbose natural soap king) began his career in an insane asylum? Did you ever meet the Root Beer Lady, a wilderness woman who served rootbeer to tourists from her cabin in the Boundary Waters? Featuring biographical songs penned by nationally-acclaimed songwriter Elisa Korenne, the Tenth Muse explores the question: “How fringe can a person get?”

Korenne is a songwriter’s songwriter and a crowd-pleasing performer who specializes in songs about oddballs. With her acoustic guitar, hand-drum, or using only her mesmerizing voice, Korenne sings stories about people too fascinating for the history books. The Tenth Muse is Korenne’s theatrical story and song concert about some of the most unlikely subjects she’s encountered. On the trail of the ordinarily unsung, Korenne also tells her own story: how she found her way from an elite education to an unlikely musical path and then from New York City to rural west central Minnesota.

Korenne and her parade of real life members of the American fringe—including a lightbulb-eating sideshow performer, a suicidal madam, a cheerleading nun, and a Russian immigrant with Munchausen’s syndrome—will help you get the most fringe out of the fringe festival.  Get more fringe.  Join the musical romp through fringe folk history with award-winning singer-songwriter Elisa Korenne.

Korenne has begun to gain national attention as a performing and recording artist. Singer & Musician Magazine lauded Korenne’s debut CD Favorite as a Top 50 independent release of 2005 along with Aimee Mann’s The Forgotten Arm and Tracy Grammar’s Flower of Avalon saying “Favorite belongs on anyone’s must-play list.” [1] Korenne has also been called “one of the best we’ve ever heard” by online independent music retailer CD Baby. [2]

Korenne’s intelligent and graceful songwriting is not limited by genre and spans pop, rock, jazz, contemporary folk, country and even Celtic and vaudeville stylings. Indie-music.com describes Korenne as “a great trapeze artist, floating effortlessly through a multitude of genres, her superb voice catching her each time with equal ease. She seduces you by creating a mood, setting a table of unnamable delights, her opulent voice drawing you in before you realize you’re even hungry.” [3]

Korenne grew up internationally before moving on to Yale University and the London School of Economics. After cofounding the international nonprofit Geekcorps—which brings high-tech volunteers to the developing world—Korenne decided to focus her energies on music, which she had previously pursued as the lead singer of the ’90s Yale funk rock band Blue Fountain Diner.

The original song and story concert The Tenth Muse debuted as part of the Minnesota Fringe Festival in 2010.